Thomas Benton Clark was born very close to the waters of Long Island Sound in Old Greenwich, CT in August, 1941.  He was introduced to the romantic world of sailing early in his life by his father, Walter Clark and his mother Janet.

Their modest home was filled with the prints of Clipper Ships by marine artists and there was a fierce running debate about which painter more accurately represented these magnificent sailing vessel because every sail and every line of rigging had to be in its its proper place. Their bookcase was filled with books on sailing, among which were the complete works of Joseph Conrad, the poems of John Masefield, and several coffee table books whose depictions of sleek and elegant ocean racing yachts represented the ideals of the art of naval architecture.  A knick knack shelf in the living room held an assortment of childhood sailing trophies, won by Tom and his younger brother, Walter Jr., better know as Stub Clark. The family knowledge about all things to do with sail boats was impressive....and by the time he had graduated from Greenwich High School, Tom had ​developed a very romantic nature to go with his keen ability to sail boats.

In 1961, in lieu of college and with the momentary dream of becoming a cowboy well out of his system...he enlisted in the Marine Corps, and his life acquired meaning and focus and discipline.  In the four years during which he proudly served, he took the motto 'Semper Fidelis' very seriously...believing that the Corps ​is a family that looks after its own in every way  and  works to keep the nation safe and free.  He gained confidence in his leadership skills, and by the time he left the Marines in 1965 he had developed the guiding principles that would form the rest of his life. His only regret was that he served in a time of peace and never saw combat.  He tried to re-enlist in 1967 during the Vietnam War, but was advised to consider himself lucky....and to leave well enough alone.

Full of confidence and in peak physical condition, he headed for the quay in Antigua where he hoped to find a cruising yacht heading down-island.  He was 24.  It happened that the yacht Jacinta, an 80' schooner built in the 1930's for a gentleman who sailed the Great Lakes, was tied up alongside for a re-fit and Tom was hired on as First Mate by then owners. Thus began his early career in the charter-yacht business which lasted for the next decade.

When the owners went ashore to build and manage Petit St. Vincent Resort Hotel on Petit St. Vincent in the Grenadines, West Indies, Tom became Captain of Jacinta, which was by this time a venerable old boat constantly in need of repairs.  He was forced to learn how to make due under primitive island conditions. He spent many a tropical night repairing frayed sails.  His sense of balance was legendary and he was the one who went aloft to untangle rigging..monkey style...underway.

In the mid 60's he took a break between seasons and sailed across the Pacific to New Zealand. There he met a master sail maker with whom he apprenticed for 3 months, learning the art of making sails by hand. Those who sailed with Tom will remember that he was forever fine-tuning the  sails to get the optimum efficiency, and this is what led to his second career as a sail maker.

In 1974, after a terrifying 360 degree rollover in a storm off Cape  Hatteras, Tom began thinking it was time to come ashore. Simultaneously he happened upon a small sail loft for sale in Essex, CT...which he bought and renamed Clark Sails, (later Clark Sail Makers), where he produced hand made cruising sails. It was in this capacity he became friends with the founders of the Corinthian. They told him of their plans to form a new yacht club in this building to “provide an environment of good fellowship for active yachtsmen and women at a modest price” (this remains our mission to this day). Tom immediately signed on and became a charter member.

In 1978 he married Molly Burke, whom he had met on the island of Bequia in the Grenadines in 1968. She built and managed The Whaleboner
Restaurant in Port Elizabeth, Bequia.  Molly says that if it hadn't been for the fact that Tom invited everyone on the surrounding islands and on the charter yachts in the vicinity... on a certain night... to a grand opening... without her knowledge... she never would have had the nerve to open... that it opened in spite of her.

They were married aboard The Dolly Madison, a double decked, paddle-wheel river steamer on the Connecticut River. They made a stop in Seldon's Creek at sunset for the ceremony.  Molly says that she married him because he was the only sailor with whom she ever felt truly safe.

Tom was known for his passion for sailing and for his cheerful fun nature. He was a friend to many. Doug Domenie described him as a “friendly salt…he was an institution.”

Sadly, he contracted kidney cancer and passed away in 1988.  He was 47 years old.  His death was shocking, as he was still quite young, and there was an outpouring of sentiment at his funeral, held at The River Museum. The lovely wooden yacht, Neath, was tied up alongside decorated in flags, and Eric Schreiber of Chester, CT played taps on his trumpet while mourners threw flowers into the water. Tom had always loved John Masefield's poem, “Sea Fever” , which was read during the service.

Later that year, Molly and a group of close friends scattered his ashes in the waters between Bequia and the whaling island, Petit Nevis. 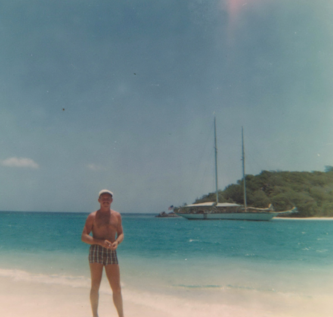